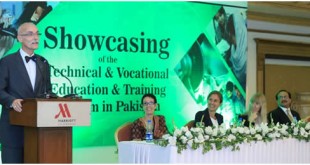 ISLAMABAD, October, 04, 2016: Speakers at a two-day international conference have underlined the need for revamping the technical and vocational education and training (TVET) as a step to reduce unemployment and support the socio-economic development in the country.

The moot- International TVET Conference Pakistan-2016- which was organized by the National Vocational and Technical Training Commission (NAVTTC), has drawn participation of international experts from 15 countries as well as TVET professional and leading industrialists from across the country.

The conference, which concluded here on Tuesday,was supported by the TVET Reform Support Programme, which is funded by the European Union and the governments of the Netherlands, Germany and Norway.

Speaking on the occasion, the minister said Pakistan has made remarkable achievements to improve the delivery of the TVET and expressed the resolve that the present government is committed to equip the country’s youth with employable skills.

The federal minister said that besides reducing the unemployment, TVET can play vital role in improving the country’s competitiveness adding that commitment of the government can be seen through the launching of the national TVET policy and Vision 2025.He also shared that the government is establishing first-ever Skills & Vocational Education University and vocational secondary schools besides a number of initiatives, which are being taken to reform the TVET system in the country.

The German ambassador to Pakistan Ms. Ina Lepel, while speaking on the occasion, underlined that Pakistan is among the world’s few countries which are blessed with natural resources and a growing young population. To reap the benefits of these resources and particularly the demographic dividend, the country needs a demand-driven technical and vocational education and training (TVET) system.

She emphasized that support to the TVET sector reform is one of the key elements of the Pakistan-German development cooperation. “We are happy to be part of the ongoing TVET sector reform, which will ultimately lead Pakistan to become a developed and economically prosperous country,” Ms. Lepel opined.

He said TVET can play a pivotal role in reducing the unemployment rate but subsequently it can also help the government to move ahead towards poverty alleviation as well as engaging the youth in productive activities.

The conference offered a platform to promote exchange of best practices, experiences and knowledge within the international and regional context for developing a better TVET system in Pakistan besides creating wider awareness on the TVET sector reform with a view to present it as a national political priority to the international audience.

The participation of the international TVET experts also paved the way to facilitate discussion on creating a permanent engagement within the region. 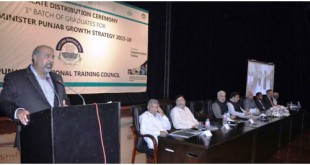 LAHORE May 12, 2016: Punjab’sminister for labour and chairman of skills development committee Raja Ashfaq ...