TVET Reform September 12, 2022 From the Press, From the Press (2017-Onwards) Comments Off on TVET provides Fashion Designing Toolkits to promote Entrepreneurship 239 Views 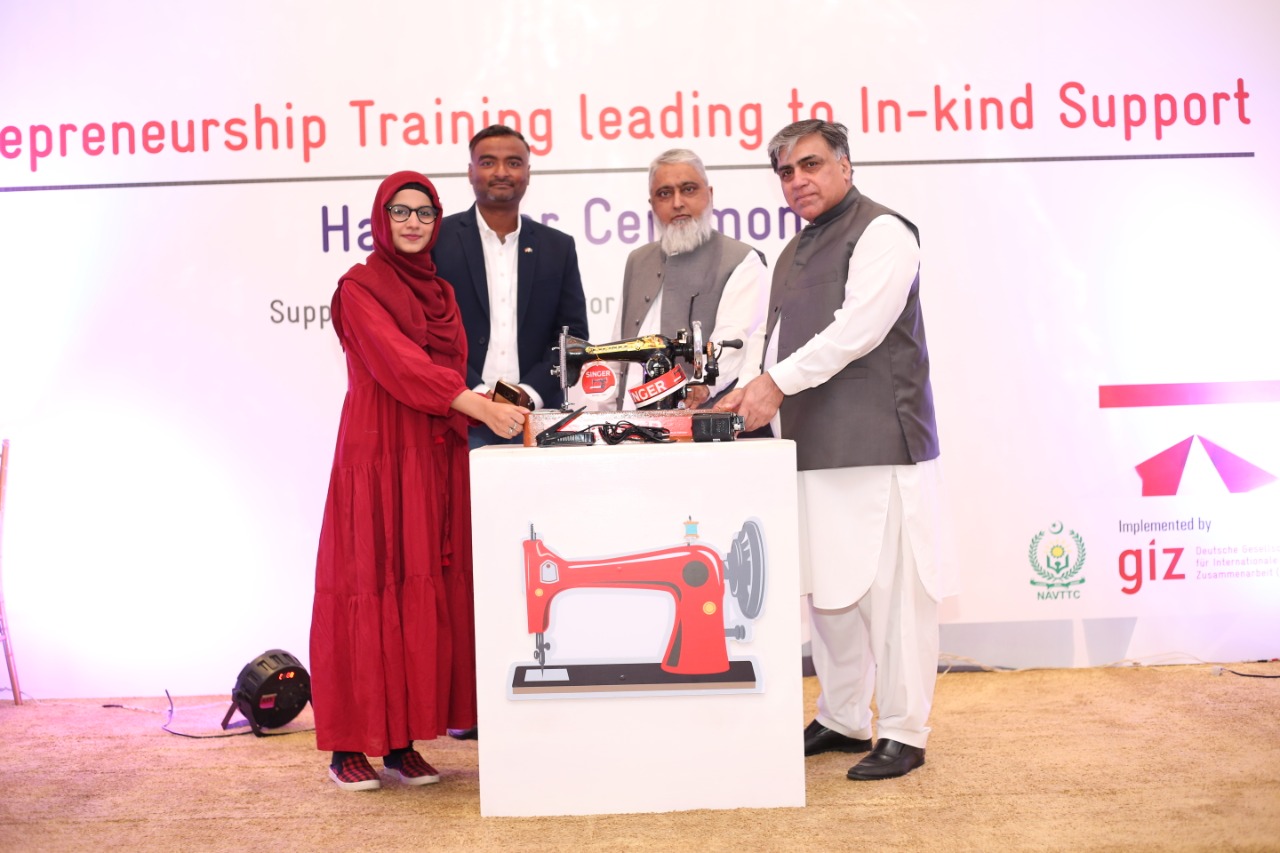 A toolkits handover ceremony was organized at a hotel in Lahore by TVET Sector Support Programme (TVET SSP)under its component, ‘Reintegration of Returnees in Pakistan’, which is funded by the German Federal Ministry for Economic Cooperation and Development (BMZ), in order to provide fashion designing toolkits to returning migrants and locals, who received training in a workshop on entrepreneurship.

Raja Saad Khan, Deputy Head of TVET SectorSupport Programme also expressed his views while addressing the beneficiaries, He informed that the TVET Sector Support Programme is funded by the EuropeanUnion, Germany and Norway, and is being implemented by Deutsche Gesellschaft fürInternationale Zusammenarbeit (GIZ) GmbH in partnership with the NationalVocational and Technical Training Commission (NAVTTC) and in close collaboration with the provincial Technical Education and Vocational TrainingAuthorities (TEVTAs) and several not-for-profits, public and private sector organisations. “TheGerman Development Cooperation considers upskilling in the informal labour market of Pakistan to be pivotal for the economic growth of the country and financial independence of individuals.

The economic stability of a country’s workers, specifically those belonging to the informal sector is directly proportionate to a stable economy. GIZ Pakistan aims to support small businesses and self-employment through the provision of in-kind support. Our approach is beneficiaries-centred and the Career & EntrepreneurshipAdvisory Services, and Employment Promotion interventions encourage and motivate the Pakistani beneficiaries to become self-sustainable in the long run”,he also added. Prior to the handover ceremony of the toolkits,a workshop on Career & Entrepreneurship Advisory was held to provide training to the beneficiaries. Beneficiaries from Punjab and KP, who participated in the workshop, will now be able to become entrepreneurs and initiate their own start-ups upon their return to their homes.

Ms. Zulaikha Khan,a returnee from Saudi Arabia, while collecting his fashion designing toolkit at the event said, “When I returned to Pakistan, I struggled a lot. I could not find any support or any opportunity that would support us – the returning migrants. This is a revolutionary step and the toolkits we are receiving today will enable us to run our own businesses and become financially stable.”The ‘Reintegration of Returnees in Pakistan’component of TVET SSP, aims to facilitate the socio-economic development of Pakistani returnees and the locals by offering them quick and effective start-up opportunities, especially in Punjab and KP, as these regions are most affected by return migration.

The component will support 15,000 individuals, including 6,500 returnees from Germany and Gulf Cooperation Council(GCC) countries through various support measures including Career and entrepreneurship Advisory Services, Competency-based Training & Assessments(CBT& A), Recognition of Prior Learning, and Employment Promotion.

September 09, 2022 The TVET Sector Support Program (TVET SSP) under its Reintegration of Returnees ...