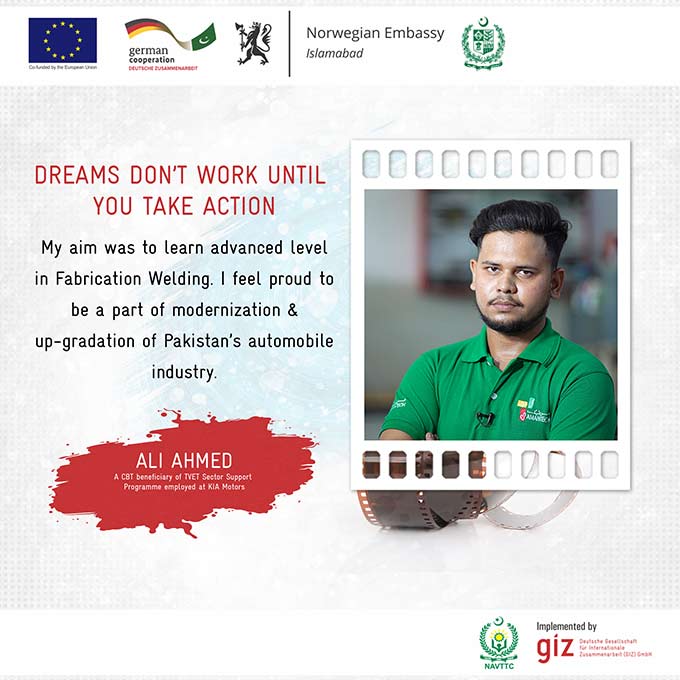 Ali comes from a humble background and eldest of his two other siblings (a brother and a sister). Life is never easy, and it becomes even harder if comes with baggage like winning a bread for the family at an early age. Ali came to this realization in his early youth, he had to look for a sustainable financial stream. His matriculation certificate could not help him in securing a reasonable job which could support his father in earning a livelihood for the family. Ali’s father is an ice-stack seller and that also is a seasonal earning. Ali came to know about Amantech, a technical training institute in Karachi, supported by TVET Sector Support Programme.  Fortunately, he got admission at Amantech for a six-months course of Fabrication Welding.

Ali received his practical and theoretical training of three-months and three-months on-the-job training at KIA Lucky Motors. Human Resource Department of KIA Lucky Motors evaluated the batch of Welding and Fabrication at their premises for potential employees at their state-of-the-art modern facility. This evaluation came out as a pleasant surprise for them because the trainees were well up to the mark of quality and standard in operating the most modern equipment of the plant in a professional manner. It happened because of the training curriculum and practical skill learning through the industry experts at Amantech as part of the TVET delivery model.

Ali got his permanent job at Kia Lucky Motors car manufacturing plant at their state-of-the-art plant at Bin Qasim port. Ali’s father dreams for a brighter future of his son after a job at such reputed automobile brand. Ali is proud of his achievement and says that he is the first guy out of his whole community to be employed in such a good organization. He wishes to continue the competency-based skill learning for advanced level in Fabrication Welding and other disciplines. He calls it a matter of joy for him by being the part of modernization and upgradation of Pakistan’s automobile industry.

Ali is the beneficiary of TVET Sector Support Programme, which is working with NAVTTC, provincial TEVTAs and PVTC since 2011 for bringing reforms in TVET Sector. The second phase of programme has funding of 62.5 mn euro for implementation of reforms in the TVET sector of Pakistan on national, provincial and regional level. The Programme is funded by the European Union, Federal Republic of Germany and the Royal Norwegian Embassy. In second phase of its implementation, programme is supporting competency-based-training of 36,800 men and women on the indigenous and industry-demand-driven trades. The Programme has been commissioned by the German Federal Ministry for Economic Cooperation and Development (BMZ) and is being implemented by the Deutsche Gesellschaft für Internationale Zusammenarbeit (GIZ) GmbH.