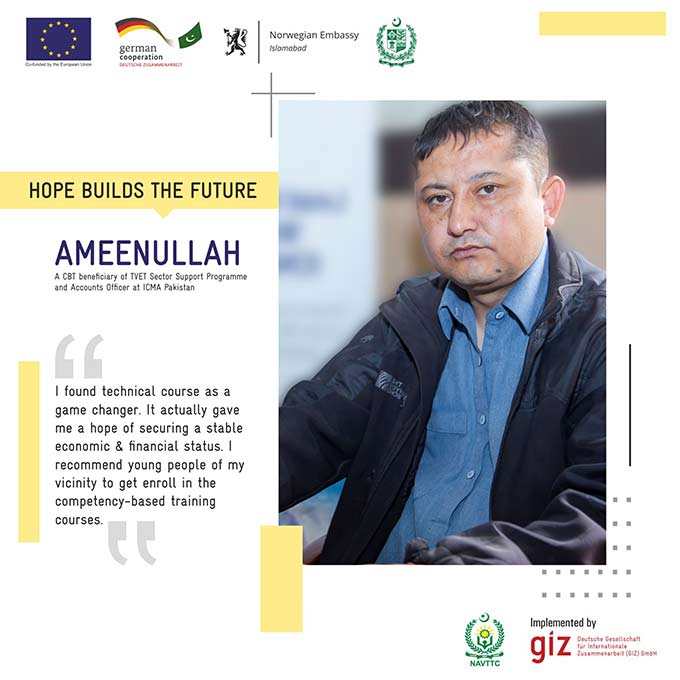 Ameenullah recall the tough days of his education and the hardships he had to face for being the member of a marginalized Hazara community in Balochistan. He refers to the time when he had limited or no access to the designated transportation for reaching college and university as it was unsafe for him to travel in any other local transport.

Ameen completed his masters somehow and looked for a job like his elder brothers who were employed in different organizations or running small businesses. He realized that a piece of degree in social sciences is not helping him out to secure a decent employment. Someone referred him to Pearl Institute for a Graphics Designing and Printing Course. Seeing a hope in this competency-based training course, Ameen finished his three-months training course leading to an on-the-job training of further three-months’.

His on-job training was held at Institute of Chartered Management Accountants of Pakistan (ICMAP), Quetta. Ameen’s performance during this tenure remained exemplary, which helped him to secure extra income while applying for a vacancy at ICMA, later on. He got a job of Graphics Designer and Publisher at ICMA and is now doing great on his official duties.

He opines that,‘such technical course actually gave me a hope of securing a stable economic and financial status while I was struggling because of unemployment and unsafe environment in any random organization or a typical business setup’. Ameen says that things are getting better for our community now and he hopes to attempt for M.Phil degree in International Relations along with his job. Due to this competency-based course,Ameen is now also working for a coal company as their Graphics and Printing Specialist as part-timer along with his primary job at ICMA.

This course has not changed Ameen’s life only, he has brought many other young people from the vicinity to be enrolled in competency-based training courses. Those young boys and girls look upon him as a role model and inspiration.

Ameen thanks TVET Sector Support Programme for such a fruitful intervention which is equipping the youth with the modern skills especially in the far-flung areas like Balochistan.

Ameenullah is the beneficiary of TVET Sector Support Programme, which is working with NAVTTC, provincial TEVTAs and PVTC since 2011 for bringing reforms in TVET Sector. The second phase of programme has funding of 62.5 mn euro for implementation of reforms in the TVET sector of Pakistan on national, provincial and regional level. The Programme is funded by the European Union, Federal Republic of Germany and the Royal Norwegian Embassy. In second phase of its implementation, programme is supporting competency-based-training of 36,800 men and women on the indigenous and industry-demand-driven trades. The Programme has been commissioned by the German Federal Ministry for Economic Cooperation and Development (BMZ) and is being implemented by the Deutsche Gesellschaft für Internationale Zusammenarbeit (GIZ) GmbH.