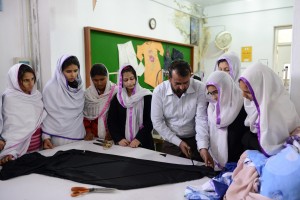 Pakistan’s readymade garments sector is full of potential but unfortunately its exports are hardly worth $ 4.5 billion a year. This is despite the fact that the country enjoys GSP Plus status awarded by the European Union (EU) that gives it preferential access to the European markets.

The reasons are many of which the major ones are that Pakistan lacks skilled workforce, there is little value-addition and the products are not marketed properly. To meet these challenges, Pakistan Knitwear Institute (PKI) in Lahore, is working under a public private partnership model and trains students in large numbers, shares Muhammad Ayub, Representative of Pakistan Hosiery Manufacturers’ Association (PHMA). He says multiple training courses are being offered at PKI and some of them with the support of international partners to overcome the issues of human resource.

The TVET Sector Support Programme (SSP), funded by the European Union, Germany and Norway, is one such initiative that is supporting the government of Pakistan in achieving its objectives of reforming this sector. Besides, a Punjab Skills Advisory Forum has also been constituted to promote collaboration and support implementation of the reforms in TVET sector.

Tayyab Mir, Principal & Registrar, PKI points out that TVET SSP has helped a lot in updating their curriculum according to the modern day demands. Earlier, there was hardly any concept of garment designing with the help of computers but now the students are learning programmes such as Photoshop, Corel Draw and CAD/CAM. The training modules of marketing, pattern-making, fiber-cutting, stitching etc. have also undergone a complete make-over under the TVET SSP. The curriculum has been revised after taking input of all the stakeholders including the industry, workers, students, the government representatives and so on, he concludes.

The story published in The News at  https://www.thenews.com.pk/magazine/money-matters/232252-Where-the-shoe-pinches