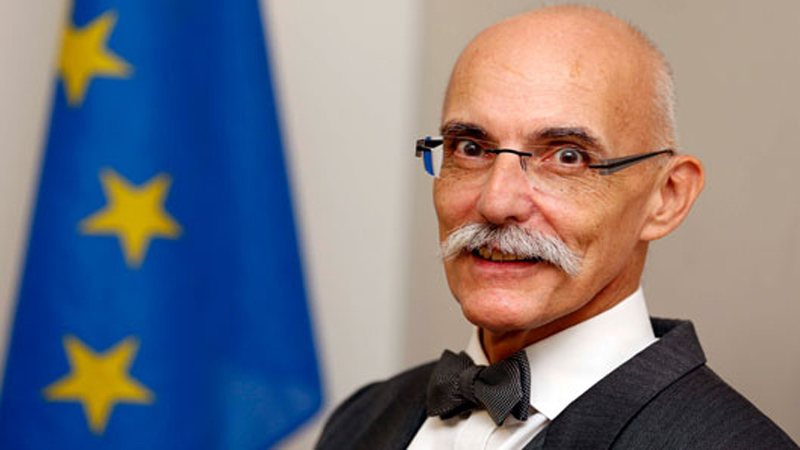 Ammar Sheikh
LAHORE: Pakistan’s youth bulge is an asset but it also poses a unique challenge for the country, most prominently, its role in socio-economic uplift. For this, quality vocational training and education can engage the youth in a productive manner, said European Union (EU) Ambassador to Pakistan Jean-Francois Cautain.
Talking to The Express Tribune, Jean-Francois Cautain said that Pakistan having a very young population, around 60-65 percent of the population less than 30 years old, it faces an opportunity to grow its industry as well as the risk of socio-economic problems that come with large unemployment rates. The solution, according to the ambassador, is in the Technical and vocational education and training (TVET) sector and Pakistan could learn from the experiences of the EU.
The EU has been a partner of the government of Pakistan for introducing reforms in the TVET sector reforms since April 2011 under the TVET Sector Support Programmes (SSP). The Programme assists the government of Pakistan in the implementation of the TVET sector reforms. The Programme is funded by the EU, the Federal Republic of Germany and the Royal Norwegian Embassy and being implemented by the GIZ in close collaboration with National Vocational and Technical Training Commission (NAVTTC), Technical Education and Vocational Training Authorities (TEVTAs) and a number of organizations from public and private sectors across Pakistan. The Programme has entered its second phase, after the completion of the first phase in 2016.
Around 3 million young people enter the labour market, 53% female, every year. However, the formal TVET system can only accommodate fewer than 500,000 trainees annually. As a result, a huge percentage of youth drifts into the informal sector every year, where they participate in a traditional ustad-shagird (master-apprentice) vocational training. Furthermore, the employability rate of graduates from the formal TVET system is very low due to lack of quality and relevance of the training content. The gap between demand and supply of skilled workforce is due to limited cooperation between the public and the private sector in TVET planning, governance and delivery. As a consequence, the workforce produced lacks the skills needed in the market.
“Now, we are in the second phase, where we are still supporting Pakistan’s apex body on TVET, the National Vocational and Technical Training Commission (NAVTTC). We are supporting our partners to make sure that TVET sector provides the right people with the right skills according to the needs of the industry in Pakistan,” said the envoy.
He said that after the first phase, one of the main issues was the mismatch between the skills provided by the TVET institutes and the needs of the market. “So the challenge now for Pakistan is to make sure that there are good linkages between the needs of the industry and what the TVET sector is producing in terms of skills,” he added.
Ambassador Cautain said, “Public-partnership is not that strong in Pakistan. Currently, the public sector – the government of Pakistan, provides most of the funding for the TVET sector with the help of partners like EU, Australia and others. At one stage, the industry will have to realize that it is for their own good to get more involved. Looking at the size of the population of Pakistan, there is a need for training for the youth. Clearly, public funding with international cooperation will not be enough”.
Another thing Pakistan needs to work on is creating coordination between the federal TVET setup – NAVTTC and provincial Technical Education and Vocational Training Authorities (TEVTAs). He said that a lot had been done in terms of putting in place the framework from a legislative point of view. “What is now lacking is that to make sure that NAVTTC plays its role with different TEVTAs. From our observations, we see a disconnect from time to time at the federal and provincial levels,” he added.
Cautain also believes that Pakistan’s industry needs to adapt to the changing economic situation in the world, as well as within the country. He said that during his recent visits he observed that disparity in modes of production. He said, “I noticed that some were using very basic, labour-intensive techniques to produce textiles; whereas, others were using automation and robotic”.
According to Cautain, the same applied to the TVET sector too as it needed to figure out the changing landscape and adjust accordingly. He said, “What is important is to make sure that the TVET sector recognizes the evolving needs of the industry. It then has to make sure that it is in line with the evolving needs of the industry as well as the economy”.