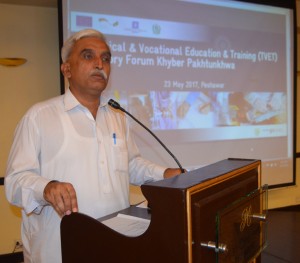 PESHAWAR, May 23, 2017: Stakeholders from public and private sector formed an advisory forum to support the implementation of reform in technical and vocational education and training (TVET) in Khyber Pakhtunkhwa and Federally Administered Tribal Areas. The TVET Advisory Forum, which has been notified by the Department of Industries, Commerce and Technical Education, held its inaugural session on Tuesday.
The forum consists of office bearers of various employers-led associations in key economic sectors such as construction, mines and marble, hospitality, light engineering and pharmaceutical. The forum is also represented by heads of the government TVET bodies including KP Technical Education and Vocational Training Authority and FATA Development Authority.
While inaugurating the provincial forum, the Provincial Minister for Industries, Mr. Abdul Kareem Khan said that KP government is paying all its attention towards promotion of the TVET sector and skill development in the province.. “Skills development is the only solution to engage youth in a productivity way and eradicating unemployment and poverty,” Mr. Khan opined. He further supported the formation of this advisory forum as one of the significant milestone for ensuring better economic prospect of the region. Secretary ICT&E-KP Ms. Farah Hamid underlined the importance of private sector, saying ”Private sector’s involvement and its collaboration with public sector can play a vital role in promotion of demand-driven training approaches for the economic growth of the province.” 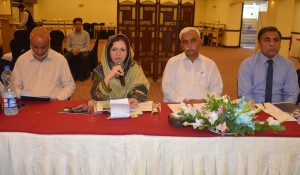 The forum was organized by the TVET Reform Support Programme, which is funded by the European Union, the Federal Republic of Germany and the Royal Norwegian Embassy, implemented by the Deutsche Gesellschaft für Internationale Zusammenarbeit (GIZ) GmbH in close collaboration with the National Vocational and Technical Training Commission (NAVTTC) as well as provincial Technical Education and Vocational Training Authorities (TEVTAs) and private sector organizations.
The forum will envision a paradigm shift of the traditional methods of training and vocational education to Competency Based Training & Assessment (CBT&A); where Recognition of the Prior Learning (RPL) will also help in promoting the validation of skilled workers, who have learned various skills informally through Ustad-Shagrid system.

Previous Advisory Forum on TVET established in Punjab to improve Public and Private Sector partnership
Next NAVTTC to train around 100,000 youth next year, Cheema