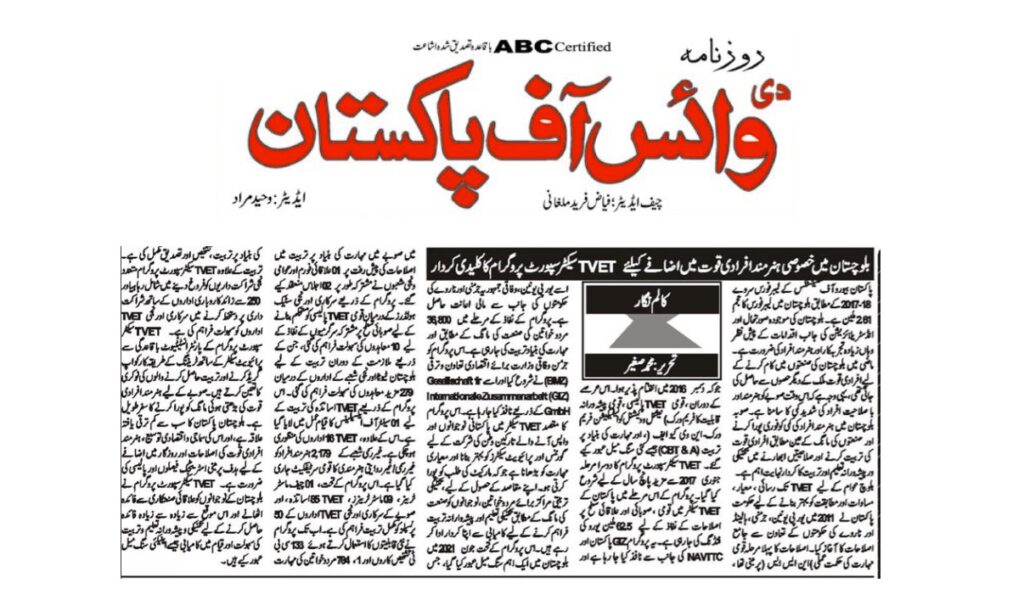 The volume of the labour force in Balochistan is 2.61 million as per civilian labour force survey 2017- 2018, Pakistan Bureau of Statistics. Keeping in view the position of Balochistan and its shift towards industrialization, it needs more experienced and skilful labour force. Consequently, Balochistan tends to attract labour towards its industry from other parts of the country in the past. Holistically, there is severe situation in Balochistan for labourers. However, the role of Technical and Vocational Education and Training is vital in providing a swift path to build a highly specialized Job centric labour force for the province. 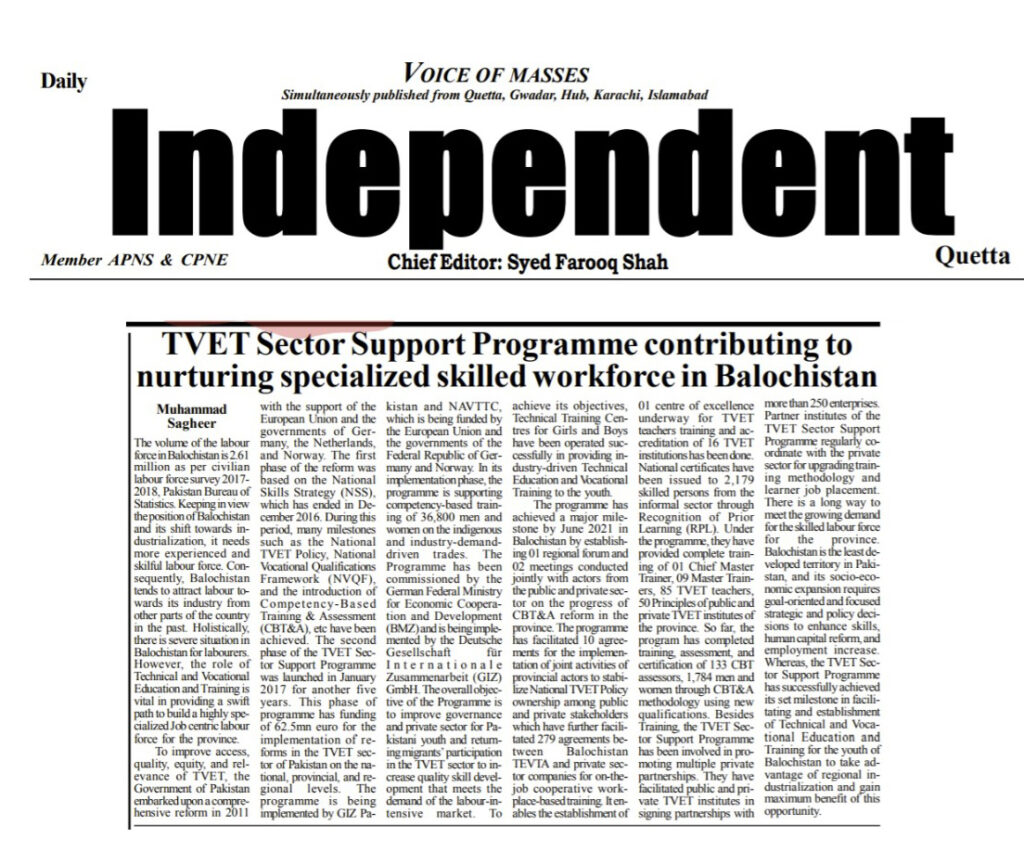 To improve access, quality, equity, and relevance of TVET, the Government of Pakistan embarked upon a comprehensive reform in 2011 with the support of the European Union and the governments of Germany, the Netherlands, and Norway. The first phase of the reform was based on the National Skills Strategy (NSS), which has ended in December 2016. During this period, many milestones such as the National TVET Policy, National Vocational Qualifications Framework (NVQF), and the introduction of Competency-Based Training & Assessment (CBT&A), etc have been achieved. The second phase of the TVET Sector Support Programme was launched in January 2017 for another five years. This phase of programme has funding of 62.5mn euro for the implementation of reforms in the TVET sector of Pakistan on the national, provincial, and regional levels. The programme is being implemented by GIZ Pakistan and NAVTTC, which is being funded by the European Union and the governments of the Federal Republic of Germany and Norway. In its implementation phase, the programme is supporting competency-based training of 36,800 men and women on the indigenous and industry-demand-driven trades. The Programme has been commissioned by the German Federal Ministry for Economic Cooperation and Development (BMZ) and is being implemented by the Deutsche Gesellschaft für Internationale Zusammenarbeit (GIZ) GmbH. The overall objective of the Programme is to improve governance and private sector for Pakistani youth and returning migrants’ participation in the TVET sector to increase quality skill development that meets the demand of the labour-intensive market. To achieve its objectives, Technical Training Centres for Girls and Boys have been operated successfully in providing industry-driven Technical Education and Vocational Training to the youth. 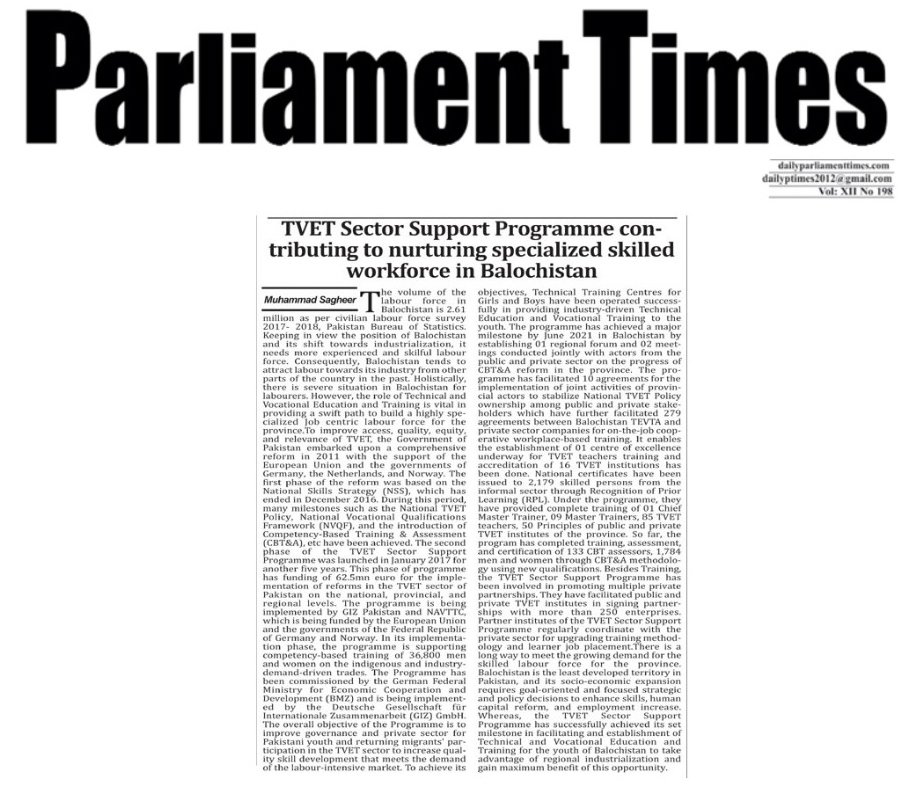 The programme has achieved a major milestone by June 2021 in Balochistan by establishing 01 regional forum and 02 meetings conducted jointly with actors from the public and private sector on the progress of CBT&A reform in the province. The programme has facilitated 10 agreements for the implementation of joint activities of provincial actors to stabilize National TVET Policy ownership among public and private stakeholders which have further facilitated 279 agreements between Balochistan TEVTA and private sector companies for on-the-job cooperative workplace-based training. It enables the establishment of 01 centre of excellence underway for TVET teachers training and accreditation of 16 TVET institutions has been done. National certificates have been issued to 2,179 skilled persons from the informal sector through Recognition of Prior Learning (RPL). Under the programme, they have provided complete training of 01 Chief Master Trainer, 09 Master Trainers, 85 TVET teachers, 50 Principles of public and private TVET institutes of the province. So far, the program has completed training, assessment, and certification of 133 CBT assessors, 1,784 men and women through CBT&A methodology using new qualifications. Besides Training, the TVET Sector Support Programme has been involved in promoting multiple private partnerships. They have facilitated public and private TVET institutes in signing partnerships with more than 250 enterprises. Partner institutes of the TVET Sector Support Programme regularly coordinate with the private sector for upgrading training methodology and learner job placement. 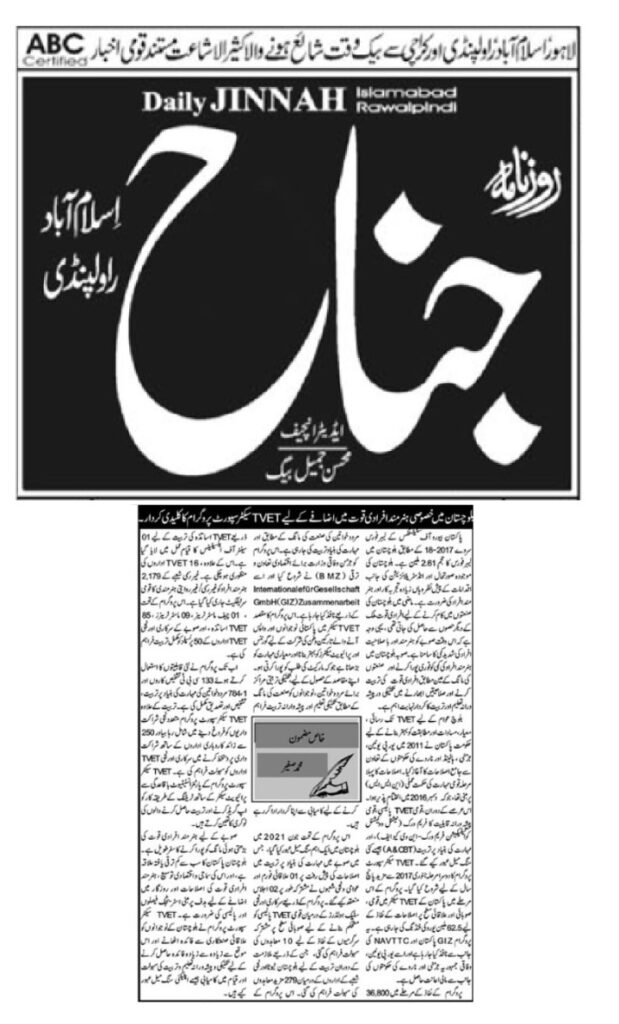 There is a long way to meet the growing demand for the skilled labour force for the province. Balochistan is the least developed territory in Pakistan, and its socio-economic expansion requires goal-oriented and focused strategic and policy decisions to enhance skills, human capital reform, and employment increase. Whereas, the TVET Sector Support Programme has successfully achieved its set milestone in facilitating and establishment of Technical and Vocational Education and Training for the youth of Balochistan to take advantage of regional industrialization and gain maximum benefit of this opportunity. 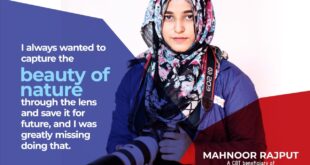 I stumbled; I fell but I Raised to Live My Passion

Sometimes you stumble upon something in life quite by accident and discover a blessing that ...