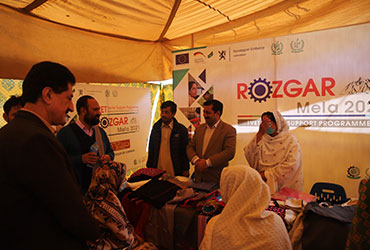 The job fair was followed by a certificate award ceremony to as-many-as 75 CBTA graduates of Government Vocational Training Centre in Skardu. GB economic potential can only be tap if government develops a formal skill development approach. There is an increasing trend of enrolment of youth in formal education but unfortunately the TVET stream remains a low priority for the youth causing a job mismatch for recruitments in ongoing mega projects like construction of Diamer-Bhasha Dam, expansion of KKH, un-explored mineral resources, tourism, trade & commerce and emerging IT sector.

Current data suggests more than 400,000 people work in the labour force (age 15-65) of GB now.  Every year it is estimated that 20,000 more young, men and women will further be added to this total labour force. Due to unavailability of skilled labour, local work force is not actively contributing to or benefiting from the regional economy. The TVET landscape of the region is highly fragmented and has challenges in defining its needs and exploring opportunities. TVET as a sector largely resides within the scattered network of local and I-NGOs and, has generally been driven with very little input or ownership of the government.

After the recent development of the approval of the TVET Act 2018 of Gilgit Baltistan, the legislative process has opened doors for real-time reforms in the TVET Sector of this remote region. In this regard DTESD partnered with TVET SSP has been supporting the GB government in developing infrastructure, train HR (Directorate, Trade Testing Board, Board of Technical Education) and largely support to sustain the reforms.